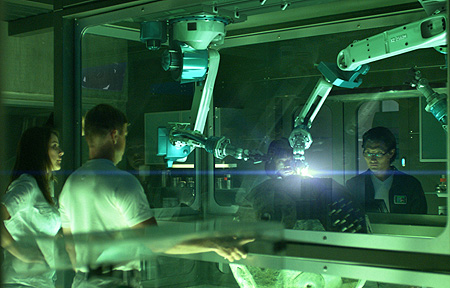 In THE ANDROMEDA STRAIN, a U.S. military satellite crashes in a small town and unleashes a deadly plague killing all but two survivors. As the military quarantines the area, a team of highly specialized scientists is assembled to find a cure to the pathogen code-named “Andromeda,” and a reporter investigates a government conspiracy only to discover what he is chasing wants him silenced.

THE ANDROMEDA STRAIN is produced by Scott Free Productions and Traveler’s Rest Films in association with Universal Pictures for A&E Network. Executive producers are Ridley Scott, Tony Scott and David W. Zucker for Scott Free and Tom Thayer for Traveler’s Rest Films. Mikael Salomon is director and co-executive producer and the screenplay is written by Robert Schenkkan.